All about Newcastle Castle 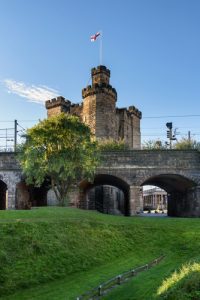 The castle that gave the city its name, Newcastle Castle is a medieval fortification and is a reconstruction of the castle built in 1350. The area had been occupied for around 2000 years, and has been restored several times. Opened to public after the latest restoration, Newcastle Castle is the latest attraction for visitors and locals of the city. This 12th century castle offers amazing views of the city, and is considered to be a reflection of the history and culture of the city. These astonishingly preserved buildings make visitors wonder over how life would have been for the people living in this castle. Open daily to visitors, you need to buy tickets to explore this historic structure.

Did you know that the Newcastle Castle was the last line of defence during the English Civil War? Did you know that the Graffiti from this stand-off is still visible inside the Keep area of the Castle? With such a strong history and strategic importance, the Newcastle Castle offers a fascinating journey into the beginnings of the city. The prominent structures still standing on the site today include the Castle Keep and the Black Gate. The Castle Keep is a scheduled ancient monument and is listed as Grade I Listed Building. Located at the center of Newcastle, there are no remains of the Roman Fort, Bailey Castle and the original Motte.

Founded in 1080 by Robert Curthose, The Castle was initially built using timber and earth. It was rebuilt using stone between 1168 and 1178. The Castle Keep standing at the site today is majorly from this period. Excavations of the area in 1977 and 1992 revealed some surprising things. One of them is the burial site of 600 Anglo-Saxon burials. The last major part of the castle that was constructed was the Black Gate. It was constructed in 1250 under the reins of Henry III, Richard and John. When the town was besieged during English Civil War, The Newcastle Castle was the last line of defence. After building of walls of Newcastle, the importance of this castle began to decline. In 16th century, the cellar area of Castle Keep was used as a prison. Even today, you can find prison chains attached to the walls in this area.

The two parts of this site – the Black Gate and the Castle Keep were linked together into a single site and named as the Newcastle Castle. This renovation and renewing of the sites was done under the funding received by the Old Newcastle Project. The site was opened for public visits in 2015 and since then it has become a major attraction of the city. Newcastle Castle history is enriching and provides an insight into the past of the city.

Continue on A186. Take A167(M) and Osborne Rd/B1600 to Mistletoe Rd
Turn right onto Collingwood St/A186
Continue to follow A186
Use the left 2 lanes to merge onto A167(M) via the slip road to Gosforth/B1318/Ashington/A189/Hexham Airport/A69/Tynemouth/Jedburgh/Morpeth
Use the right lane to take the A1058 exit towards Tynemouth & EAST/Seaport/Jesmond/B1600
Continue onto A1058
Turn left onto Osborne Rd/B1600

Drive to your destination